The recent TMZ tabloid presents our Farmers Market as being in violation of the Mayor’s Mandate to provide social distancing measures. TMZ used photos and language that is highly inaccurate and misleading when it refers to the Studio City Farmers Market.

Three of the four photos in the TMZ article are not from the Studio City Farmers Market. The fourth photo was taken by paparazzi at the one entrance allowed during this time, just as a limited number of shoppers were allowed to enter. The caption on the photographs said: “Check out the Studio City Farmers Market in L.A. Sunday, packed with scores of people crowding in … some of whom were not wearing face masks.”

Below are pictures taken by staff on Sunday April 5th. 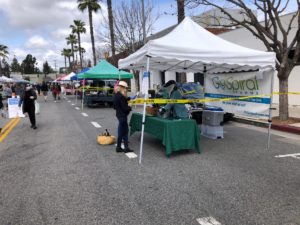 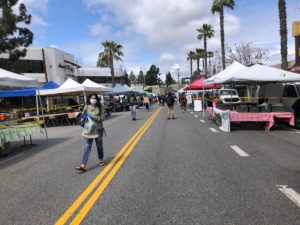 For the record. The Market’s operating procedures were accepted by the city. The LA County Department of Public Health Environmental Health Division inspected the Market on Sunday to make sure the Market was in compliance. The inspector provided guidance as to how many people could enter at one time, and left well after the Market opened, satisfied that we were in full compliance.

Less than half of our regular vendors were at the Market on Sunday and there was more than 20 feet between booths. The Market has also hired additional staff and security.

The management staff truly appreciates the emails of support that have been received, as does the SCRA and the Studio City Chamber of Commerce Foundation, who jointly sponsor the Market.

We are working with the County to reopen a section of the Market e.g.: Yogurt, Baked goods, Frozen Soups etc. that are temporarily suspended pending further protocols issued by the County.